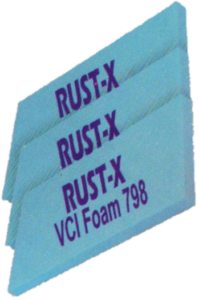 VCI Foams are heavily imprengated VCI emitting devices used for the preservation of Electrical systems as well as electrical equipment like motors, drives, computers, screens, servers, etc where these can be placed along with the parts and keep the equipment protected by the release of VCI Vapors.

VCI  Foam  is  a  Polyurethane  based  open  celled foam structure used as a carrier for VCI molecules.  VCI  foam  is   used  where   cushioning  or  impact protection    is    required    to    the    parts    being protected.  The  foam  is  compressible  and  can  be compacted  and  fitted  into  tight  spaces  and  can also  be  placed  within  boxes  having  components with uneven geometry and takes the shape of the void.  This  can  also  be  used  to  protect  high  value automotive and aerospace components, electrical, electronic or mechanical equipment.  The foam has a high level of VCI emission owing to a  3-D  structure   and  infinite   sites   emitting  VCI molecules compared to VCI Paper or VCI Film